Here's my effort:   "Dear Sir,   I write in response to the DFT proposal to improve Air Quality and Safety. Whilst broadly agreeing with the proposals contained within the document, as a kit car

There's only 2 questions that really apply to kit builders:     8 Do you agree with the introduction of WLTP in IVA, for light vehicles built after 1 July 2018?   10 Are you content with our 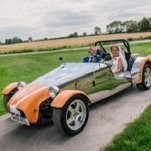